Published by Pat Curtin on December 2021

We've been plenty busy here at Farland Classic Restoration! We sold three generations of Porsche 911 last month and just finished up an extensive detail on the 1996 Porsche 911 from the 993 generation. Today we're leaning back into the Classic Colorado Restorations as we show you around the recent paint and sanding work on our driver level Mercedes Benz 190SL restoration. Join us for the 190SL Legacy!

If you've been keeping up with the blog, our technicians have spent countless hours honing their mastery of all things paint since their recent trip out to California for Sikkens Paint training. The extensive training course set the team up for success on this Mercedes-Benz 190SL from the W121 generation. First, we'll cover a bit of german car history.

When Mercedes-Benz introduced the iconic 300SL Gull Wing at the 1954 New York Auto Show the car was immediately beloved for its powerful inline-six, iconic styling, and already-proven racing pedigree. Mercedes would continue a similar design language with the smaller inline-4 car. Unlike the 300, the 190SL was developed from the earlier Mercedes 180 and the "Ponton" family of models. This smaller model offered convertible styling, more conventional doors, and a tried-and-tested chassis from the 180. For Benz' the car was a hit and the brand would go on to build over 25,000 examples throughout the car's 8-year production run.

Above you can see a photo of the 190SL when it first came in. Now we'll turn our focus toward this Cream colored classic. This car has lived a storied life down in Mexico for many years. You can find some more photos from when the car arrived, here.

As we started disassembly and documentation we found some areas that needed extra attention. The rear taillights showed signs of having been changed throughout their life. Early 190SL's had a smaller taillight design originally from the earlier 'Ponton' Mercedes-Benz 180. This car's rear end showed the metalwork had been modified to fit the larger taillights which came on cars after 1956. This car was originally sold as a 1955 model, so we knew the car needed some bodywork to ensure the correct taillights were going back onto the car. Down below you can see the car with openings for the larger taillights.

Once we'd gotten through the bodywork on this 'driver' restoration, we took the car into the booth for the first epoxy and primer layers. As the car got into the booth we spent lots of time properly masking up the entire car. The more masking and making sure things are right now, the less shakedown work we'll have to do as we finish up the restoration. From there the grey epoxy layer coated the car to ensure body lines and fitment were correct.

After a good look-over from our metal master and our owner Jack: the hood, doors, and trunk were hung to ensure those lines were perfect. At this point, the car came apart again as we rolled it into the booth for paint. If you missed out on the painting be sure to check out the live streams we did over on Facebook of the entire painting process!

Now the team has moved into wet-sanding the doors, trunk, dash, and hood. The wet sanding process always follows the initial paint, but proper paint prep can save countless hours for our team, ensuring this paint quality is second-to-none. 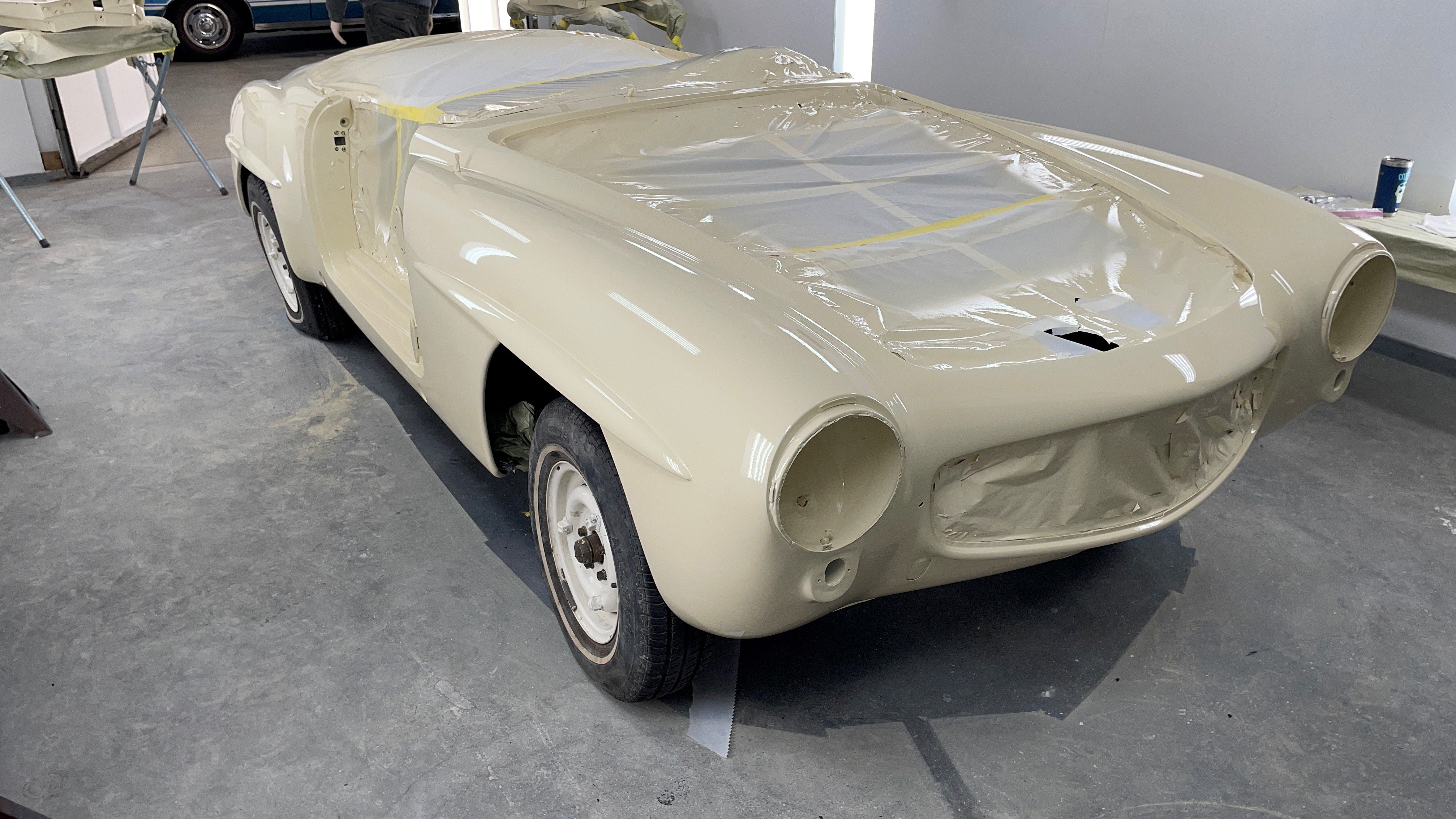 While our technicians finish up the wet-sanding, we'll continue to keep you in the loop on all the final assembly and shakedown processes for this inline-4 icon. For now, if you have a question about your restoration, a classic needing a bot more attention than you have time for, or a classic barn find ready to be rolled out, give our shop a call at 303-761-1245 or send an email to info@farlandcars.com. Thanks for stopping by!

Decades of Luxury - The Marvelous Mercedes

We've been busy the past few months from paint school to the assembly of the Electric Porsche &...
Read More

Over the past few months, we've covered quite a few of the Farland Classic Cars moving through...
Read More