Speedsters in the Showroom

For decades now, Porsche has been the ‘end all, be all’ in terms of lightweight, sporty, rear engine cars. Their crowning symbol of lightweight has always been the Porsche Speedster. Initially Porsche began the Speedster name after an idea from an American importer named Max Hoffman. Max wanted a lightweight, sporty car that could compete at tracks in Southern California against the MG and Austin-Healy crowd. Porsche agreed and soon produced the “America Roadster” in 1953. In total only around 17 were ever built. Today these cars are worth upwards of a half million dollars. Porsche saw the success in the “America Roadster” and soon began production on the 365A Speedster for the entire world in 1954.

From there, Porsche and the Speedster name took off in the United States. Many of the Speedsters quirks come about when you are ‘adding lightness’. This one came to us from back east, the new owner had it come through our doors for a final look over. Initially, these cars cost around $2,500 when new. Now they’re well worth more than 100 times that original value, in proper conditions. 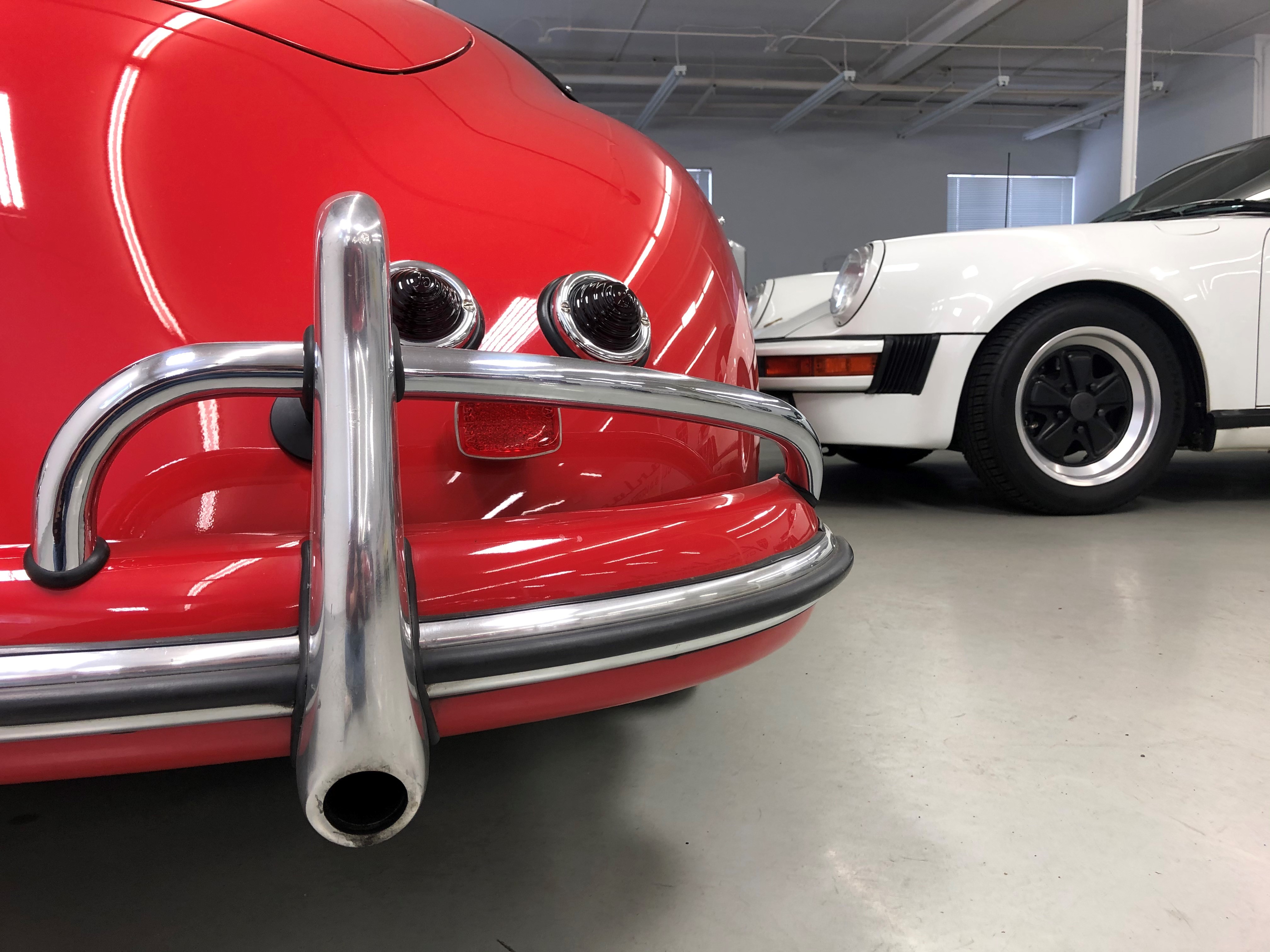 Following the “America Roadster” in 1955 was the 356A Speedster. From 1955 and 1958 Porsche produced just 3,676 examples of the 356 Speedster. This speedster is a Reuter body, who had been producing bodies for Porsche throughout the 50’s. This speedster is equipped with the 1600cc engine.  The 356A Speedster is known for its many unique rarities. There are extremely limited controls on the dash. Just two knobs: one for headlights and the other for wipers. In 1957 Porsche was transitioning the 356 from the T1 body, toward the T2. This car features many of the elements of the earlier cars including the beehive taillights, 5-bolt door striker plates and the bucket seats. The Speedster also features the low-slung windshield which continues into today. Porsche continued to produce the Speedster thru 1958, but the name would not be used again for nearly 30 years. 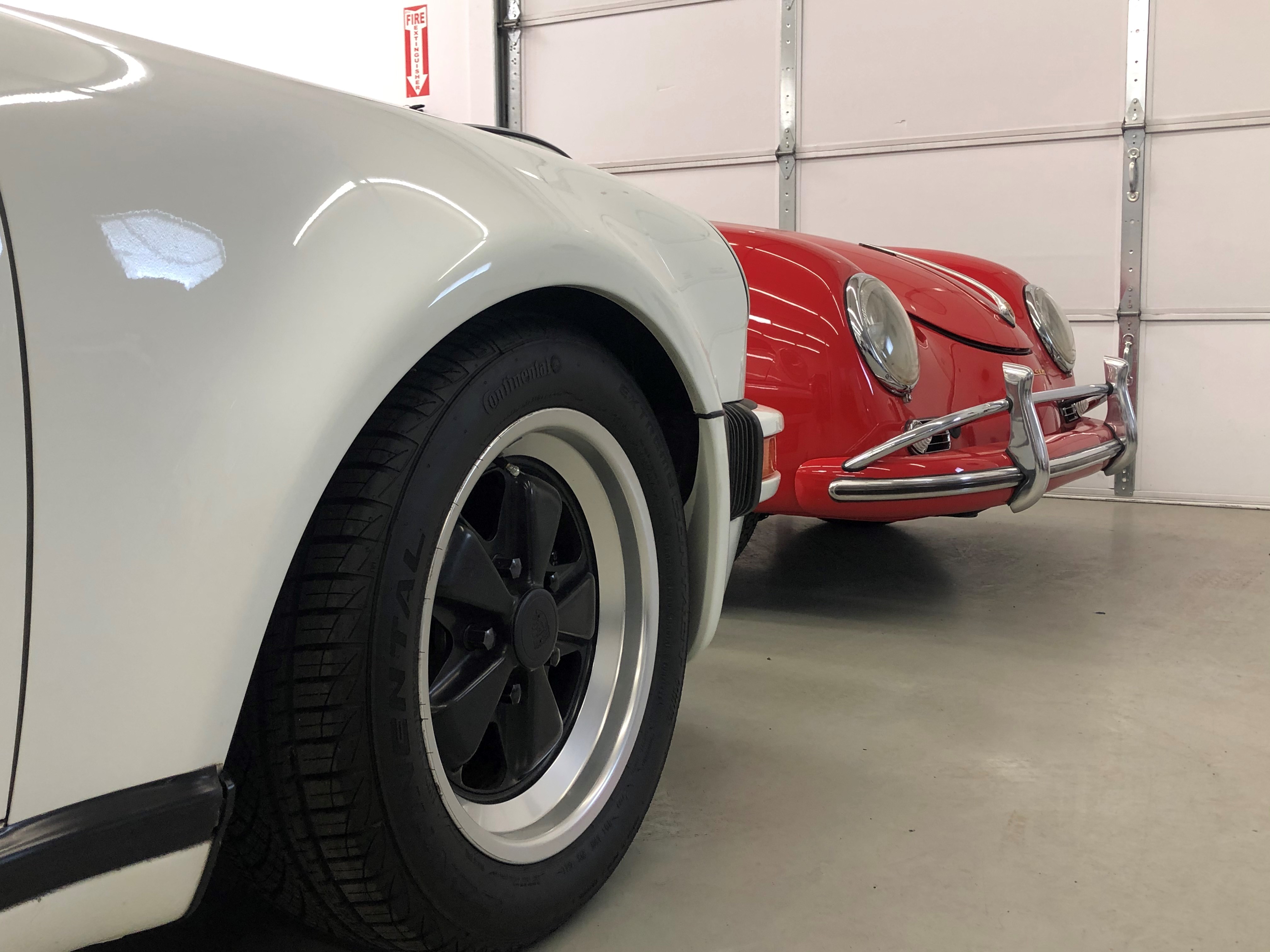 Of course, that brings us to the 930 or G-body Speedster. Porsche had ended production of the 930 in both the US and Japan due to changing emissions regulations in 1980. When the company pivoted back to the 911 and away from the 928, more engineering was put into the 930 and they were reintroduced to American and Japanese markets in 1985.This car was a passion project of engineers within Porsche as a call back to the classic Speedsters of the 50’s. Of the 2,104 produced, just 823 came to the U.S. this generation of Speedster was available in three body styles, the narrow body as was available on 911’s of the era, the turbo-flared body as we see here, and specific to the German market was the Flachbau or “Slantnose” with popup headlights rather than Porsche’s iconic headlights. While Flachbau’s were available to be imported into the States they often had a large markup from the other Speedsters models. Of the 948 Flachbau’s around 160 were imported into the States. In total just 171 Porsche Speedsters were ordered in the narrow body. In the end the G-body Speedster was just a two-year model. This being a 1989, it is equipped with the highly sought after Getrag G50 5-speed transmission mounted to the 3.2L flat six engine. The car is also optioned with sport seats and shows just under 20,000 original miles.

The third Porsche in the party is what would've been the Speedster's equivalent in 1961. Throughout Porsche's early production the brand worked with local shops to produce the bodies for their cars. This 1961 Porsche 356B Super 90 is just that, a body built by Drauz of Heilbronn. The Super 90 is unique in that it is one of very few Drauz' with a factory roll bar. Total production numbers are not well known, but it helps to make this Porsche truly unique. Of course the 356 came with 3 engine sizes: the 1600, the 1600 Super, and the Super 90. The Super 90 was known for its 90 horsepower.

All three of these Porsches are immaculate examples that truly show off the beauty and passion within the brand. Question is, which would you take home?