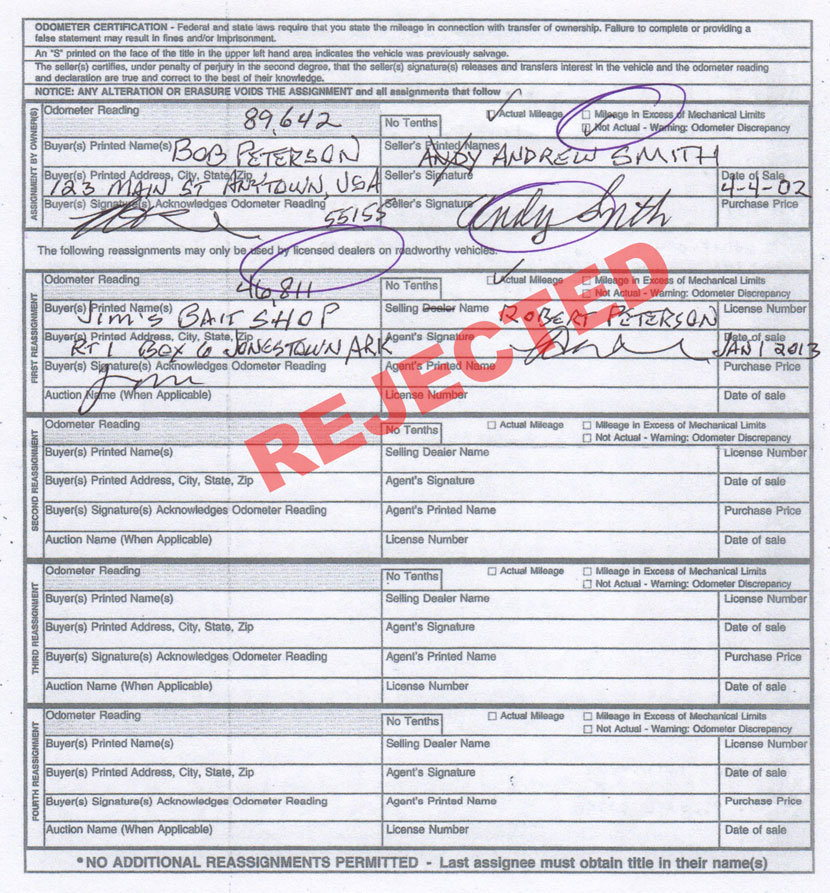 Don't Get Rejected at the DMV - Classic Car Titles

Negotiable, in checks or titles means you can transact it. If a seller has a negotiable title, he can transfer it to a buyer who should have no problems registering the car in his name.  Determining title status is a critical step in your due diligence, because if it isn’t completely correct, you can’t register or insure the car you just bought! Now - this is all assuming that you have already compared the title VIN number to the vehicle itself! 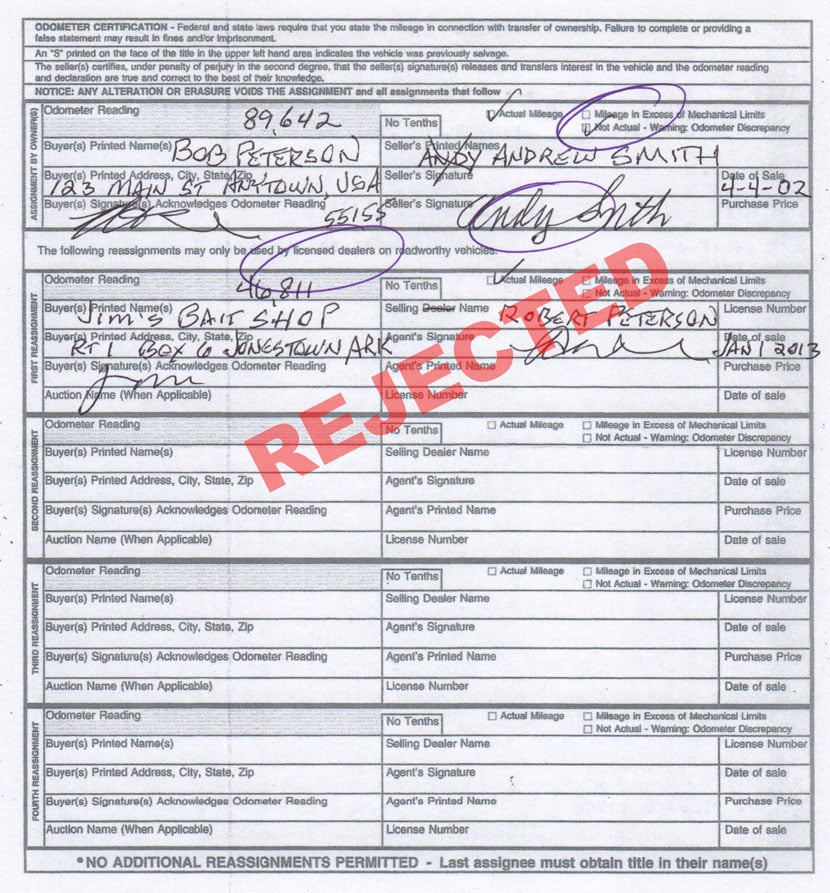 Most of these comments apply to buying a car from private individuals; a licensed dealer is obligated to deliver clear, negotiable title to his buyers and his license is in jeopardy if he doesn’t. However, even a dealer can miss a problem and while you have a serious hold over him, it may take months to sort out a sticky problem while your money is in his bank, not yours. If you need to engage legal help, that’ll add up fast. What if the dealer closes up, declares bankruptcy or just tells you to take a hike? Best plan is to know the title is sufficient before sending any money. (And to investigate the track record and apparent solvency of the seller.)

If the seller says he has the title--what can go wrong? Well, is it in his name or joint with his now-ex-wife, whose attorney has told her not to sign anything? Maybe it’s in his father’s name, who has sadly passed on, and the family never bothered to use the death certificate and provisions of the will to get a new title. Or it’s in some business name that has been defunct for years and no officers are still around. The permutations are endless, but the bottom line is: If the vehicle isn’t registered in the name of the person selling it, there are likely to be problems. This is especially common with vintage vehicles, since many have been out of service and unlicensed for years. Or, the seller bought the car not running years ago and saw no need to register it during his ten-year restoration. (Many people do not immediately get a new title for a project car they bought because then they have to pay sales tax on it, and who wants to do that—especially if it’s an expensive one. At re-selling time, he still has the old title his seller gave him—which may have problems—and it may be too late to correct them. 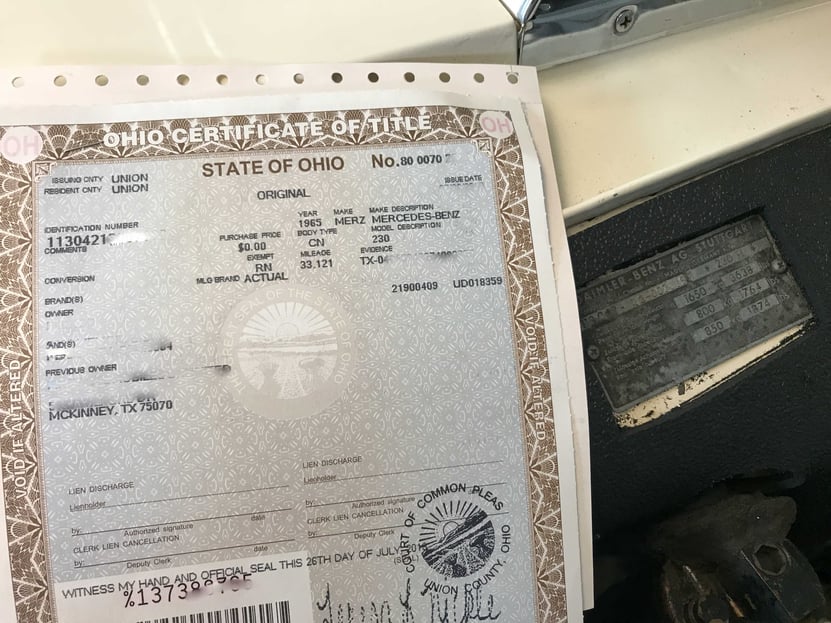 How can that be?  In some states, the seller’s signature needs to be notarized on the title. But, maybe that long-ago transaction happened on a Sunday afternoon, the man signed it, but it was never notarized. No notary today is going to certify an old signature not done in his or her presence. And again, the guy may be dead or moved away and unable to sign again properly. Let’s say he did move away, but you manage to track him down and he says he’s willing to help. Will you be comfortable sending the (only) title to a car you just paid for to some guy you don’t know, three states away, on his promise he’ll go find a notary and follow through? Sure, some people will, but some will have forgotten all about it until their caretaker dumps it in the recycle bin. And then there are the ones who now realize they are still the legal owner of the car and ask how much their help is worth to you!

Worse yet, sometimes a seller of one of those expensive cars will try to hand you the properly-signed title they received when they legitimately bought the car, but never registered it.  Therefore, that title isn’t negotiable until the taxes and penalties—possibly on a 6-figure car—are paid. All the time and money you have invested in having the car inspected and other expenses will have been wasted if the seller won’t make the title right. 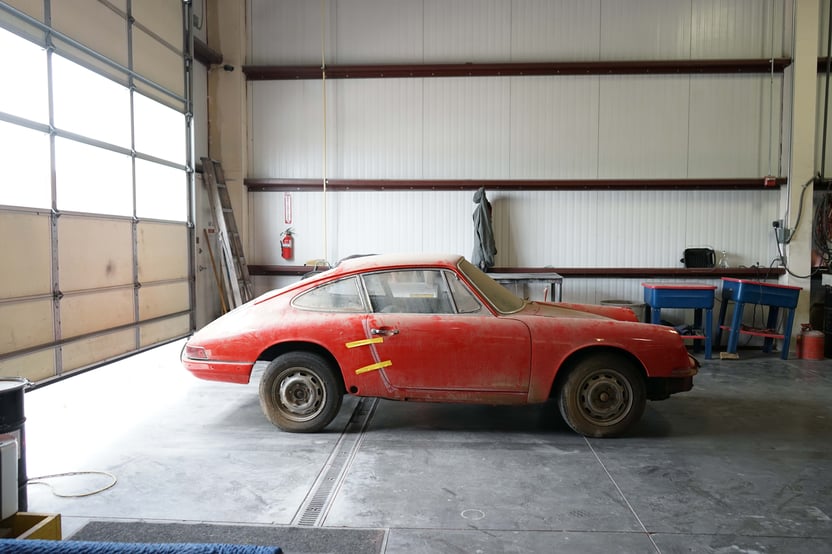 Many deals on vintage cars happen between individuals who are unaware of title niceties, so finding problems is very common. Such as: Man A trades his old car to Man B for a boat. They write the boat’s number on the back of the title and he signs in the wrong place. Man B never does anything with the title or the car until he sells it to man C six years later. They cross out the boat data and maybe they both sign somewhere on the title.   Then man C spends two years restoring the car. When he’s finished, he finally goes to the DMV to title it and buy license plates. The clerk has a good laugh over all the errors and cross-outs and says he has to go back to man A and that guy needs to get a duplicate title and start over, because this messed-up one is null and void. Man C now has $30,000 invested in the car and man A has disappeared: moved, died or might even be in prison! Or, maybe our man A actually found a notary and signed the title over to man B.  However, A’s name printed on the front of the title is Franklin W. Jones. He signed as ‘Willie Jones’ (because “nobody calls me Franklin”) and the notary didn’t catch it. Now, years later, no DMV will take that one either, unless you can find Willie and have him sign a one-and-the-same affidavit. But he might now be impossible to find. For another example, maybe there had once been a loan on the car, but when it was paid off the bank never signed off on the satisfied lien or the owner lost the lien release. Ten years ago the bank failed and was taken over by the FDIC and no longer exists. And no one anywhere will agree to sign off on the lien—without which no DMV will register the car.

Whew!! How can a guy make sure he’s getting a negotiable title when he buys an old car?!!!   It’s not hard, really.  Before wasting time and money on a car you’re considering, your first due diligence step should be asking the seller to provide a good copy of both sides of the title.  Take that to your local DMV and simply ask the clerk if there are any problems.  If there are, she can tell you what needs to be fixed—it might be simple or it might be a deal-breaker, but you’ll know before spending any more effort on that car. 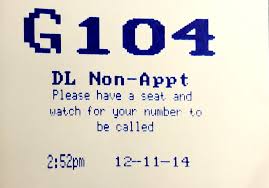 Good news!  The DMV says the man’s title is fine—so nothing can go wrong now, right?   Oh yeah, it can! Remember the problem with Willie? If the seller makes any mistakes when he signs off the title to you, there’s a problem. Bear in mind that most people only handle vehicle titles occasionally, so no matter how well-intentioned the seller may be, he can easily screw it up. In the car business, we know to never leave a customer alone with his title and a pen! It is imperative that he sign exactly as his name is printed on the face of the title and that he do so on exactly the correct line—and no corrections are allowed!  This sounds petty, but the bureaucrats at all DMVs are sticklers for such details and will insist that everything is perfect. Added complications arise if the car is owned jointly with someone else or by a business. How in the world can you make sure it is done right?  Easy! Remember when you took a copy of his title to the DMV? If the clerk says there are no problems on it now, ask her to write on that copy you showed her exactly how the seller should sign it off to you. If you buy the car, send that back to the seller and impress upon him that he needs to do it exactly like the sample you just provided. Human nature is such that once your money is in his pocket, his motivation to jump through any more hoops diminishes rapidly, so have a very clear understanding about this. What if the seller does make an error, sends you the title and then leaves for two months’ fishing in Alaska (on your money)? You got a problem. You have to watch ladies especially carefully, because their signatures are usually neat and easily read so errors stand out, unlike many men’s scrawls. And a lady may have changed her last name since the title was printed—she must sign as her name is on the title, not her current one! Insist that the title be sent to you via some trackable overnight service and not snail mail or put in the car’s glove box when it’s shipped. Some unknown transport driver or thief could wind up with your car, and its title.

Finally, once all this is figured out, how do you pay for the car? No one will take a personal check any more and these days any kid with a good color printer can make an amazingly convincing cashier’s check. The safest way is to pay by wire transfer, from your bank to the seller’s, and it’s also the fastest. Just make certain that you are paying the person(s) or entity named on the title—not some ‘agent’ or brother-in-law. If you pay someone else, you have not legally bought the car and have no fraud protection. (You weren’t really thinking of putting $22,000 in cash in a Fedex envelope…were you?) I accepted cash once years ago and when depositing it in my bank, they discovered a bunch of it was counterfeit!

Oh, boy—who knew buying an old car could be so difficult? These are all lessons learned the hard way after thirty years in business and we are glad to share with our followers.  After spending months trying to straighten out a non-negotiable title a time or two, there are collectors who now only buy from licensed, established dealers and consider any extra purchase cost to be a wise investment in security and peace of mind. If you have questions we can help you with, please email me here.